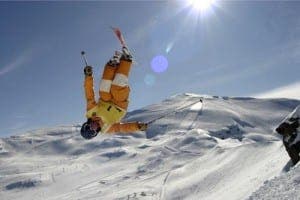 A WORLD skiing championship is coming to Granada for the first time.

Hundreds of skiers and snowboarders from 40 nations will touch down in the Sierra Nevada Pradollano resort to compete in Los Campeonatos del Mundo de Freestyle Ski y Snowboard.

Taking place from March 7 to 19, it will include dozens of contests in disciplines including skicross, halfpipe and big air and will be televised in 20 countries across the world.

The event will generate €16.1m for the region, according to the University of Granada’s research.

“This season is one not like any other,” said Francisco Javier Fernandez, the Junta’s tourism minister.

“This is an important milestone for the resort, city and Granada province.

“The championship will project the image of Andalucia as a destination for snow and headquarters of the biggest world snow sport events.”