Joking about which side of the road people drive on around the world aside, it turns out that driving on European roads is safer than on the roads in the United States.

First thing’s first, did you know that texting while driving in the States is actually legal?

It might not seem like a big thing as, when driving through heavy traffic, some people might be tempted to glance down at their mobile phones to see if anybody has taken something they’ve said on Twitter out of context.

It’s not all doom and gloom over the pond – as the British would say – it also turns out that driving stalwarts, truckers, actually earn more than their European counterparts.

Truckers in Europe earn a figure in the region of 28,000€ per year, which is significantly lower than what they’d earn in America – which is a figure around 36,500€ per year to do the same job.

This increase in wage may come down to the state of road safety in the America. In 2015 there were a total of 35,092 traffic related deaths in America – an 11% increase on 2014, according to the World Health Organisation. 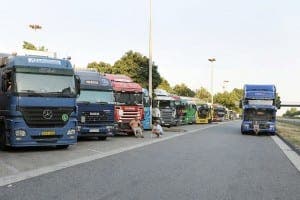 This is actually a surprise as truckers in Europe more often than not work in excess of 48 hours per week – and quite often even over 60 hours per week. In America, drivers are not allowed to work more than 60 hours in a week.

Spending the best part of your days on the road is not the lifestyle for everybody but, in the US, it seems it’s a more appealing choice and there’s a guarantee that you will not be overworked.

A long haul journey in America will see you be away from home for up to six weeks but, in Europe, you may be expected to stay on the road for months at a time.

This sometimes, depending on lifestyle choices, might actually be a preferable thing to do in Europe as some people may be looking for a form of escapism and a way to make money while doing so.

Whereas trucking in Europe may be a way to explore the continent and line your pockets it seems that doing so in America isn’t quite as enjoyable as it would be in Europe but it certainly is a great way to make some good, honest, hard earned money.

John Culatto - 1 Dec, 2022 @ 15:13
HEALTH chiefs in Gibraltar announced they would start offering a 99% effective HIV medication to those most at risk on World AIDS Day. It formed...