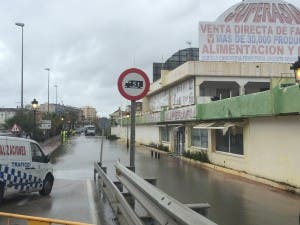 It has to be one of the unluckiest locations on the Costa del Sol.

The Chinese supermarket Super Asia, in Sabinillas, has been flooded three times in just three months.

The former headquarters of Andalucia Dream Homes estate agents was this morning once again a few centimetres under water.

The road outside was cut off to traffic in yet another bout of flooding after an unseasonably hot weekend which saw temperatures in the Andalucia region hit the mid thirties.

Andalucia is no stranger to these types of freak weather incidences, with areas in the Costa del Sol put on ‘red alert’ in December when the equivalent of one month’s rain fell over one weekend.

Thankfully Aemet have foretasted the chance of rain to decrease towards the end of the week prompting hopes for a drier, warmer weekend.