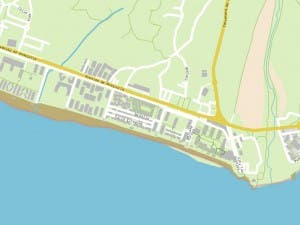 A POPULAR beachfront walkway has been given a controversial facelift.

Torrox’s Partido Popular council authorised the cutting down of trees on the coastal Avenida Esperanto to carry out 301,027 of improvement works.

This was despite widespread opposition from both residents and opposition political groups over several months.

The bulk of the money was spent on making a sloping section safer, while benches and ‘oases’ were installed along part of the path.

Óscar Medina, the PP mayor, defended the work, which he said was crucial to helping it become an ‘emblem of the Costa del Sol.’

“Most of the work was focused on the slope, which could have proved dangerous to pedestrians,” he said.

“We are glad we can present its new look at the start of the tourist season.”