IT’S a story of corruption, drugs, and rock n roll that began with the murder of a Norwegian club owner in Marbella.

But how did Gary Owens, a British rock star on the rise, get sucked into the dark underworld of the ‘Costa del Crime’?

Manchester-born Owens had always dreamed of being a rock star.

“At lunch breaks during school I would always be in the music room playing the piano, it has always been about music,” he tells me as he strokes one of his 14 cats in his modest home in the Torrox campo.

But it was after his friend brought him backstage at an ACDC concert at the age of 15 that Owens decided he was going to be a rock star.

“It was so impressive,” he said, “I had never thought about rock before I saw them, and then I watched Michael Schenker from UFO perform, and I immediately decided I wanted to be a rock God, I bought a guitar and practiced every single day.”

The self-taught guitarist set up a band with his friends, A II Z, which went on to tour with Black Sabbath and Iron Maiden.

But as the rock scene began to die down in the mid 1980s Owens decided to pursue a solo project and a change of lifestyle, moving to Puerto Banus in 1989.

“It was much more Wild West than it is now,” Owens explains, “I was living on a 90ft boat in the port and there were super cars everywhere.”

But within a few months of his arrival, Owens somehow found himself a prime suspect in a murder investigation.

Torjborn Heta, 33, had been found dead in a well, just weeks after agreeing to let Owens use a recording studio in his home on the Golden Mile. 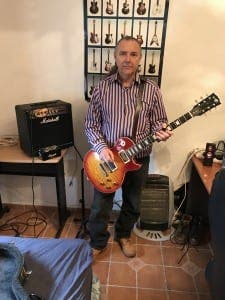 “I only met him a couple of times,” explains Owens, “A music manager introduced me to him, and while I played around in his studio, I overheard them having a meeting about shipments of ‘cartridge toner’.

“At the time I was so young and naïve that it didn’t even clock with me that that was code for drugs.

“In my mind he was a really nice guy and was into his music, I was looking forward to recording in his studio.”

But just eight weeks later, Owens received an ominous knock at his door.

Owens was taken into a black car, where two others were sitting waiting.

“They told me that Heta had tried to go behind their backs in a drug deal and that now he was dead.

“They put a gun to my head and told me to leave the country, saying that police would be looking for me, I was a loose end they needed to tie up.”

Owens, who was playing weekly gigs at the Banana Beach club, moved to an apartment in Marbella, refusing at first to give in to the gang’s threats.

But as him and his wife Jayne began to feel increasingly less safe, they decided to move to Tenerife, hoping to put the saga behind them.

It didn’t work. Days later Owens was arrested by a 15-strong group of Spanish police, who swarmed his vehicle and thrust a shotgun through his window.

The rocker was arrested on suspicion of murder and flown back to Malaga.

“There were about 30 Guardia Civil waiting on the tarmac with machine guns, it was unbelievable.

“They held me in a ramshackle jail with rats running around and a basic metal roof, it was more like a Mexican prison.

“I was in a cell with a group of heroin addicts who were all shooting up.”

After two days, Owens, who spoke no Spanish, found himself in a Marbella court in front of judge Doña Ester Diaz.

“She insisted to me that I would be released within a few days.

“Then they measured my feet to compare them with the size 8 footprints left at the scene of the crime, and I have unusually small size 6 feet.”

But as Diaz questioned why Owens had been arrested at all, an argument broke out between the judge and the lead investigator on the case, Jimenez Lomas.

“I don’t know what they were saying but it was obvious he wanted me to go down for it,” claims Owens.

It would later transpire that judge Diaz and Jimenez were actually husband and wife.

“It’s ludicrous, a total conflict of interest,” slams Owens, “I can’t believe it was allowed to happen.”

Owens was taken back to his holding cell, but would break out two days later.

“I paid a gypsy about €60 in today’s money to get a hacksaw and break me out, I wasn’t waiting around to be framed.”

However, he was picked up a few days later and taken to a Malaga prison.

“They handcuffed me to a bed for a week,” claims Owens.

He was moved to a new jail in Alhaurin but it would be 18 months before he was released again. As we speak today, he still does not know what happened to the other suspects, but believes their wealthy criminal bosses paid for their releases.

“They could ‘afford’ to be released, it was totally corrupt, and they are all either dead or have changed their names,” he surmises.

It was during his first jail stint that Diaz became the first judge in Spanish history to be suspended and fined – €100,000 – following a corruption probe.

And although Owens was eventually released in 1992, he was never cleared of suspicion.

The Englishman remained in Spain for three years, when he claims he worked for MI6 to undermine the drug cartels and mafias operating up and down the coast (see below).

In 1995 he was advised by the British consulate to return to the UK, where Owens claims he was offered protection by the National Crime Agency, who told him to start his life again.

The guitarist set up an internet service provider, the first in the north east of England.

Called Merlin, the company grew to be largely successful, but Owens was forced out of the company by its board members in a hostile takeover.

Shortly afterwards, in 2008, he was issued with an European arrest warrant by Spain as they wanted to speak to him about the murder now more than 15 years ago.

He was taken to London and later released on bail of £5,000, but in the High Court lost his appeal against the extradition. His appeals to the House of Lords and the Supreme Court also proved unsuccessful.

Despite no evidence against him, in November 2009, he was flown back to Spain and put back in prison, only to be released in February 2010, after wife Jayne paid bail of €6,000.

As the bail terms remained until last September, when the couple were told there was no case, Owens was forced to remain in Spain after being released with no money and no passport.

“I want €30 million from the Spanish government; it’s the least they owe me when you consider how much I have lost out on.

“It has hung over me my entire life and it ended my music career, who knows how much money I could have made.”

Owens has hired a new lawyer and hopes to take his case to Strasbourg, where he plans to sue both the UK and Spanish governments for breaching his human rights.

In this extraordinary man’s life, nothing is out of the question.

My stint as an MI6 agent

After being released in 1992, Owens claims to have been met by two MI6 officers from

“I was recruited by MI6 to help them bring in members of the British drug mafia,” he boldly claims, “I helped them uncover Ronnie Knight and get him sent back to the UK, that’s why I stayed on the coast for a few years.” He details the events in his online book;

“I decided I wanted to bring down the drug mafia that the Spanish had allowed to run rampant and who ruined my life, and I wanted to go after Ronnie Knight after he gave my name to the Turkish Mafia.

He would always brag to us about his Security Express robbery.

I was still frequenting Ronnie’s bar at this time and a guy called Richard turned up.

He was fronting as a producer from Coin Film Studios where he was funding a pilot show that was to be hosted by a well-known guy on the coast called Maurice Boland.

Richard invited Ronnie to appear on the show with Peter Stringfellow and some others in November 1993 at Coin film Studios.

Barrie Nathan, a BBC film producer was to do the show, and Richard was supposedly the money.

Richard took Jayne and I out for a few meals in Marbella where he lived in a villa with cameras all round it. He drove a red Porsche Turbo, and had a huge office in Puerto Banus, I was invited down to his office one day and witnessed what sort of work he was doing.

I was sat in his office that had only him in it, but had 20 desks and computers all brand new, it was gigantic.

He was on the phone openly talking about deals with tons of marijuana, and arms deals, one call after another.

Looking back and with what I know now, I would say that Richard was an MI6 arms and drugs broker on a huge scale.

We went up to Coin film studios with Richard Bellman, Ronnie Knight and Peter Stringfellow.

Sue knight was with us and Jayne, Barrie Nathan and a load of other people. The show was never going to be shown or done, it was all a front to get into Ronnie and make it look like Richard could deliver, the idea being to force him back to face charges in the UK.

I knew he was trying to talk Ronnie into going back and give himself up to the police.

Richard said he could broker a deal with the papers and police, but Ronnie did not want to go, so I decided to give him some incentive!

We went down to his bar Knights, drilled the locks out so it looked like a break in, and emptied everything out of his bar.

All the stock, the sound system, we left nothing.

It was like an empty shell. It was the end of Ronnie knight on the ‘Costa del Crime’, his credibility was shot!

He did the deal with Richard/MI6 and left the coast for a 7 year sentence.

We did a bit more to disrupt the drug trade and then I moved up to Javea North East Spain, near Benidorm, where I tried to take down British drug boss Kevin Concanon.

But he found me out and beat me to within an inch of my life, I had to return to the UK. I was at risk of being killed.