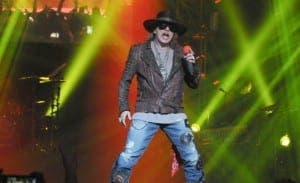 THE promoter of an AC/DC concert has been fined to the tune of €15,000 after the lead singer was swapped last minute.

Cataluna-based Live Nation was stung with the hefty penalty after it refused to refund disappointed fans attending the rockers’ gig at Sevilla’s Estadio Olímpico on May 10 last year.

They had expected to hear AC/DC frontman Brian Johnson so were surprised when Guns N Roses’ Axl Rose took his place on stage unannounced.

According to Sevilla’s council, the promoter’s refusal to give out refunds infringed the Junta’s rules on tickets for shows in the region.

Consumer group Facua has welcomed the fine but said it should have been double.

Anthony Piovesan - 6 Feb, 2023 @ 19:00
With Spain now home to the world’s oldest person the Olive Press takes a look at the lives of other Spanish supercentenarians Spain now has...