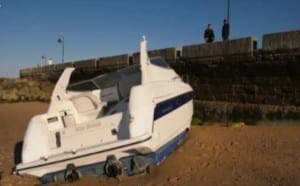 A BRITON fell asleep on his yacht in Marbella and washed up on a beach in Cadiz more than 100 miles away.

The unnamed 65-year-old appeared disorientated when he emerged from his boat and realised he was no longer in Marbella but on La Caleta beach in Cadiz.

He was helped from his boat by the Maritime Rescue service and local friemen but did not need medical attention.

A sweeper alerted authorities to the vessel at around 5.50am on Wednesday morning.

The man said he had fallen asleep on the Miss Brenda, the name of his boat, in Puerto Banus.

He believed his anchor broke, allowing his boat to drift away.

Amazingly, the Brit crossed the Straits of Gibraltar without being disturbed.

Upon leaving his boat he only requested a hotel room, and was transferred to a central hotel in the capital of Cadiz.

A spokesman for the local coastguards confirmed: “We were called by the Civil Guard around 5.40am yesterday.

“They were alerted by council workers cleaning La Caleta beach who spotted the yacht heading for rocks as it sounded its siren.

“The vessel had run aground near the shore by the time we mobilised a rescue team so firefighters helped the occupant to safety in the end.”