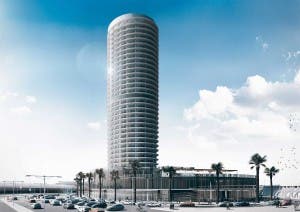 A PROPOSED high-rise building and casino in Malaga city is facing fierce opposition.

Critics have blasted the planned 443ft structure, saying it will transform the city’s skyline too drastically and overshadow other important buildings.

While it has been endorsed by the city council, opponents are lambasting its ‘unsustainability and visual and environmental impact’.

Qatar-based Al Bidda Group was given permission to build Suites Malaga Port, the name given to the skyscraper hotel last year, on the jetty that outlines the eastern side of what is one of the oldest continuously operated ports in the Mediterranean.
While the initial proposal solely involved a skyscraper hotel, it is now believed a casino is also a part of the project.

Suites Malaga Port will reportedly have 352 rooms, parking for 485 vehicles, and feature a casino, spa, luxury shopping centre, conference centre, and swimming pools. If the project goes according to plan, the new hotel will create an estimated 1,300 construction jobs, with 350 additional jobs when it opens in 2020.