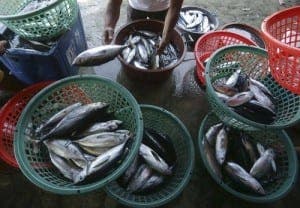 COSTA del Sol restaurants are being targeted in a crackdown on illegal fish.

Junta environment officers, the guardia civil and police are carrying out unannounced inspections at markets in the area a bid to stop people catching and killing threatened species.

Those caught with illegal fish could face hefty fines and even prison sentences.

The junta is spearheading the joint operation, which a spokesman said has been launched to tackle a ‘very widespread and common problem’ of using the fish as food or bait that has ‘increased in recent years’.

Species identified as threatened will if possible be released back into their natural environment, with wrongdoers prosecuted for breaching the law.

Specialist teams have also been set up to monitor sites known to be home to at-risk fish, in a bid to deter illegal fishing.

Several species, such as the lapa ferruginosa and the caracola, are now either in danger of extinction or vulnerable due to being illegally caught along the coast.