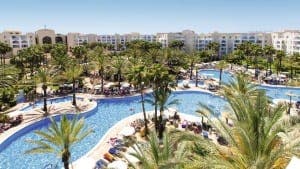 SPANISH hoteliers have called for Brits to be banned from all inclusive holidays after food poisoning claims rocketed by 700% in one year.

Hotel owners in Spain have had to fork out a staggering €4.9 million in compensation for brits blaming the food for their fake illness.

The Association of British Travel Agents has backed up the hotels’ complaints.

It blames the loophole that allows tourists to submit a claim using just a medication receipt from a pharmacy as evidence.

They are then able to claim as much as €3,500 using no win no fee law firms to represent them.

“It seems that since PPI and whiplash has dried up, they are now after holiday sickness,” said a spokesperson for the ABTA.