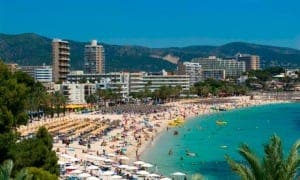 A WELSH rugby player has been found dead in his hotel room in Mallorca after playing in a tournament on the island.

The man, who had been on a rugby tour, has been named as 29-year-old Luke Hole.

It is believed he was found dead by his teammates in Magaluf.

Hole had been taking part in the Mallorca Beach Rugby sevens tournament as part of the Pontyclun RFC team, along with dozens of teams from Europe.

His club said on Facebook: “Absolutely heartbreaking. Our thoughts are with his family, loved ones and friends”.

A spokesman for the Foreign Office said: “We are supporting the family of a British man following his death in Mallorca, Spain.”