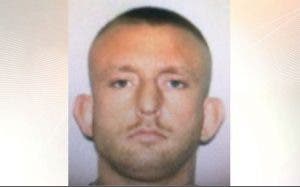 A BRITISH fugitive is thought to have swum from Spain to Gibraltar to hand himself in.

Jason Waterman, who is nicknamed Jumbo because of his large ears, arrived on the Rock on Monday night dripping wet and with a bag of soaked clothes.

His arrival came after a crimewatch appeal to find him was launched that morning.

He refused to reveal how he got to the British territory, only saying it was not throught the frontier.

It is believed he swam in a bid to avoid border guards and hand himself into the British Defence Police.

He is accused of being near Bagby airfield in North Yorkshire, in October 2015, shortly after a plane arrived loaded with drugs.

Border Force officers seized the light aircraft, from Holland, before a man, who was not caught, was seen running from the scene.

A briefcase containing seven kilos of cocaine – worth around €1.3 million – was seized.

The UK’s National Crime Agency said it is now seeking to extradite him under a European Arrest Warrant.

The north east operations manager at NCA, Brian Shaw, said: “It might sound like a cushy number, sitting around watching Crimewatch Roadshow on a Monday morning, but life as a fugitive is hard and stressful.

“The NCA first issued an appeal for Waterman in London nearly a year ago.

“Clearly something about the new appeal made him crack.

“To everyone else feeling the stress of being on the run I would say we are patient people, we keep the pressure on, and we never stop looking for you.”