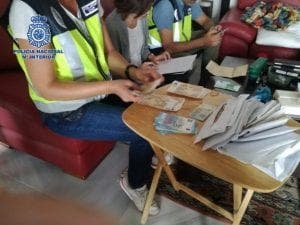 AN alleged British crook who made millions out of timeshare was first exposed by the Olive Press a month ago.

The OP reported how Howard Manton and his family, including his son Jack, who uses the surname Capelli, had been raking ‘up to €100,000 a week’ from unlucky British victims.

We reported how they were operating out of an office near Torre del Mar and had been for many years.

We also revealed how a Benalmadena lawyer was involved in the scam.

They have now been revealed to be just one of many.

A police spokesperson said yesterday: “National Police officers have smashed a criminal organisation based in the province of Malaga specialising in timeshare fraud.

“Thirty-six people have been arrested, and another placed under formal investigation but not arrested, on suspicion of fraud, money laundering, forgery and membership of a criminal organisation.”

The spokesman added: “Among those detained are the alleged ringleader, a British man, and two lawyers believed to have been responsible for the money laundering.

“The suspects offered their customers, all British and timeshare owners, a timeshare holiday product.”

The police operation was codenamed Manta – Spanish for blanket.