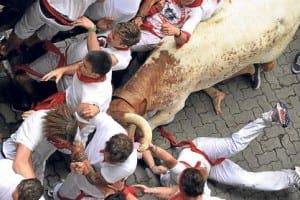 The rocekt was launched from the town hall balcony at noon above thousands of people packed into the square below.

The crowd, dressed mostly in the typical white clothes and red neck scarves — erupted with screams of ‘Viva San Fermin!’ before spraying each other with wine.

Tomorrow will see the first of eight morning bull runs, in which locals and tourists will test their speed and bravery by racing with fighting bulls along a 850 metre street course to the bullring.