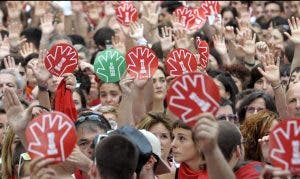 THERE have been at least two sexual assault claims from Pamplona’s San Fermin festival.

Two women claimed they were groped during the first night of the bull running festival last Thursday.

One of the alleged gropers was arrested immediately, according to Policia Local.

Pamplona City Council said it ‘considers any behavior that violates the sexual freedom of the people or involves a sexist attack is equally deplorable and deserving of the most forceful repudiation of this institution and the citizenship to which It represents’.

It comes after last year’s festival saw the group sexual assault against a young woman from Madrid.

A trial date is expected to be announced soon.

This year, Pamplona is full of red hands, a symbol of the fight against sexual violence.