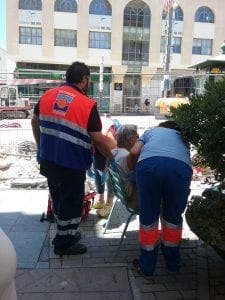 RESIDENTS have blasted the San Pedro pedestrianisation works after an elderly man allegedly became the second to be injured.

Local resident Jose Duran posted pictures of the man on Facebook on Thursday.

“Another accident in the blissful reform of the marquis de duero street,” he said, “The unfortunate man has fallen off his electric chair and into a ditch after losing control when wheels  got stuck in one of the many small and large holes.

“He didn’t kill himself, though it looks like he broke something in one arm.”

Emergency services can be seen attending to the man, who has had his arm placed in a sling. 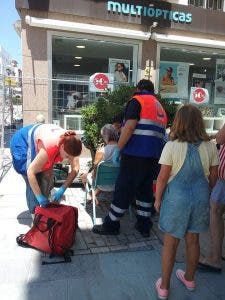 Local sources have told the Olive Press he was taken to Costa del Sol hospital.

“How long will this take?” asks Duran, “When are the authorities going to take action? What are the local police doing? Do the Deputy Mayor and the rest the town hall’s officers not walk around the area?”

The works in San Pedro began in January of this year and will see €2 million invested into renovating its town center.

The aim of the works is to semi-pedestrianise the areas between the town and the boulevard, making the latter more accessible.

There will also be a new public lighting, irrigation and electricity.

Street parking will be eliminated, making the area more pedestrian-friendly once the sidewalks have been widened.

The works have been awarded to company Obras Generales del Norte for €1,090,566, paid for by the Provincial Council.

They were scheduled to last for 10 months, but local business owners, speaking anonymously, have told the Olive Press the works are expected to run deep into next year.

The Olive Press is awaiting a comment from the town hall.

Walter Finch - 9 Dec, 2022 @ 15:00
THE heavens have finally opened over Malaga this week as torrential rainfall has swamped the usually sun-drenched province, with the Serranía de Ronda soaking...