A SPANISH hunter has killed herself after receiving threats on social media from animal rights activists.

Melania Capitan, 27, was found dead last Wednesday from an apparent suicide at her apartment in Huesca.

Capitan, from Catalonia, had amassed a huge fan base on social media posting images of herself hunting.

She had almost 39,000 followers on her Facebook hunting page, where she shared hunting tips.

Some posts proved controversial for animal rights activists who would leave harassing messages. 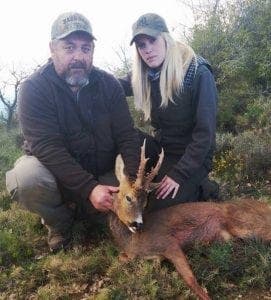 It is not known if her death was directly related to the cyberbullying, but it is believed she may have phoned some friends to say goodbye before she took her own life.

“We did not expect this, it’s like a horror movie,” a friend told Spanish newspaper El Mundo. “I knew her for years. She was an extraordinary person. It is inexplicable what happened.”

The blonde huntress is reported to have left a suicide note for friends, but the contents of the letter have not been released.

Critics continued to flood her Facebook page with messages even after she died.

“She’s finished the lives of many animals and no one defended the death of them… I think our [lives are] worth the same as theirs,” one person wrote.

Others mourned her death, saying the loss was a ‘shame.’

“I do not like hunting, defending animals and killing for [hobby] seems horrible to me. But it’s a shame that this girl took her life,” another user wrote.