A MALLORCA winery is operating on 100% renewable energy. The 1,300-metre-square Son Juliana bodega is set just below the spectacular Tramuntana mountain range between Santa Eugenia and Biniali. 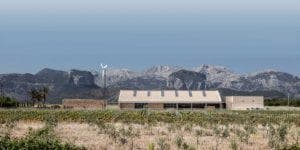 Built in just 15 days, the winery is the brainchild of local architects Munarq Arquitectes. Cork-insulated roofs allow a stable temperature for the wine to be stored, with some 40,000 litres a year currently produced.

“What is unusual is that it is 100% renewable energy powered and not connected to the net.” The linear building has a concrete base which is covered in mares-stone. Wine is bottled and labelled at the west end of the building then stored in a cool area near the entrance. 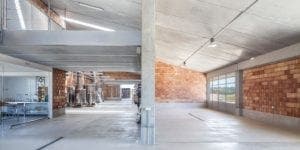 The winery is located in the basement, because it requires a special temperature and humidity conditions. The retaining walls are stone to take advantage of the thermal mass and soil moisture that remained during the summer. The ventilation and temperature is carried through pipes connected to geothermal heat pumps.