THIS is the moment SEVEN men ganged up on one outside a Spanish nightclub.

The attack happened on Sunday morning after the group are believed to have been partying all night.

Footage filmed by a neighbour shows the group, all believed to be Spanish, frantically punching and kicking the fellow partygoer in the head and body.

The attackers fled the scene in Gandia, central Spain, when someone shouted that the police were coming.

An investigation has been launched. 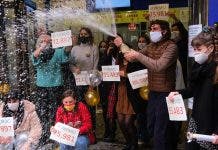