A DNA test has proven once and for all that Salvador Dali is not the father of 61-year-old Spaniard Maria Martinez.

A Spanish court had ordered Dali to be exhumed in July at Martinez’s request, a ruling which was highly controversial.

A large stone slab had to be removed so forensic scientists could access the embalmed body and take samples from the body.
In their statement on Wednesday, the Dali Foundation said they were unsurprised by the discovery.
“There was no indication from the very beginning that this paternity claim had any veracity,” it said. 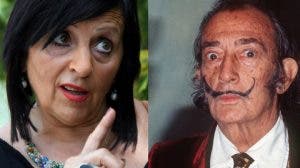 Martínez’s lawyer, Enrique Blanqes, said he would not comment until he has read the forensic report.
The 61-year-old Martinez (pictured right) said her mother, a maid at one of Dali’s homes in Port Lligat, had a clandestine relationship with the artist.
She has been attempting to prove that Dali is her father for more than a decade.