A POLICE raid on a long established ‘hippy commune’ has led to the arrests of 24 people, including a man accused of strangling a woman in France.

The morning raid on the new-age settlement, in the Alpujarras, also netted thousands of marijuana plants, as well as illegal vehicles and animals.

In total, police have levelled 103 charges against the community that has been living in the valley below the town of Orgiva since the 1980s.

The raid was launched this week after an American tourist claimed she was sexually assaulted by a number of men in the settlement – named Beneficio – near Canar.

Police confirmed that they had seized a total of 2,320 marijuana plants in the raid, that utilised dozens of cars and a helicopter.

Among the 24 arrested – many of them foreigners – was the 23-year-old who was being sought by the French authorities for strangling his wife.

The alleged murderer was carrying the victim’s mobile phone at the time of his arrest.

Many of the crimes were against public health and involved illegal wells, building and land clearance in a protected area, inside the Sierra Nevada Natural Park.

The settlement was allegedly set up in the 1980s by a retired nuclear scientist who had become a Hare Krishna.

It bills itself as a centre for ‘peace and harmony’ and self-polices itself. 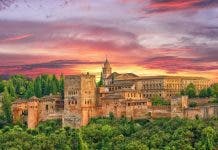