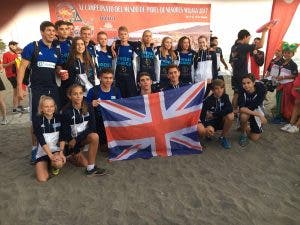 GREAT Britain’s Junior Padel team have arrived for the world championships in Malaga.

The XI World Junior Padel Championships began with an opening ceremony on Sunday at the El Candado Club in the east of the city.

Running until Sunday, the world’s top boys and girls from each nation will compete against each other, with this year’s entries totalling a record 450 pairs.

Team GB will be competing in the Open Championships and Team Championships, against countries including Spain, Mexico, Argentina and Paraguay.

The junior team will be looking to keep their spot on the podium after finishing third behind Spain and Argentina at the previous world championships in Mexico two years ago.

Boys coach Mauricio Payne told the Olive Press: “If we can repeat our result from Mexico that would be great.

“These guys have been training really hard and anything is achievable for us.”

Padel tennis is a growing phenomenon in Spain and for expats on the Costa del Sol.