BRITISH expats who lost up to €20 million in a failed pension advisory firm believe their signatures may have been photocopied onto investment documents.

Around 300 Brits, most living in Spain, are battling to retrieve their funds after Alicante-based firm Continental Wealth Management (CWM) folded in September.

CWM boss Darren Kirby left for Australia following the closure of CWM’s Javea offices with the company said to have expanded into Ibiza, Portugal, France and Turkey before folding.

Victims have also raised fears about being asked to sign blank dealing instructions and their pensions being invested in high-risk assets which paid large commissions.

One 69-year-old pensioner based on the Costa Brava told the Olive Press he lost €210,000 after transferring €470,000 despite stating he had a low-medium risk attitude.

He added: “I believe some of the investments were made without my knowledge. I think that is the case because I do not recall signing sheets for all the investments I had.”

An email, seen by the Olive Press, shows CWM asking a client to sign and return a blank dealing instruction.

Another British expat, who is trying to recover around €200,000, said some pensioners ‘have lost everything’.

“My paper work that I sent has been altered, my risk was changed from medium to high and my dealing instructions have been photocopied repeatedly buying and selling assets I didn’t authorise,” said the 55-year-old.

“I still have some money left and I am still young enough to get compensation,but my fund has gone down by half and I need compensation to get it back on track.

“This negates the very essence of financial advisory services,”said Flores.

“It is a blank cheque to invest wherever, whenever. It could well be standard practice, very worrying.

“Signing blank documents would not stand in a Court of law. The problem with these firms is that they were all investing in highly risky investments without them knowing, as well as dubious funds just because they paid the higher commissions.”

He added that losses sustained by investors would be recoverable as the investments that failed to perform, or went bust, were linked to life insurance policies.

We have not been able to find CWM as being registered to provide investment advice with the financial regulator CNMV.

When the Olive Press spoke to one former CWM member of staff he denied any knowledge of clients’ signatures being duplicated or of clients being asked to sign blank dealing instructions.

When we pointed out we had an email from CWM sent to a client asking them to sign a blank dealing instruction he replied: “I do not know how that has come about.

“We did not get too involved. There was a dealing desk.” 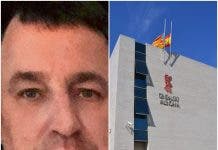