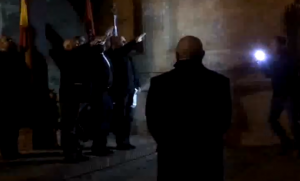 The group congregated in the gardens of the Cathedral on Calle Cisterna two days after the anniversary of his death on November 20.

They sang the ‘Cara al Sol’ and raised their arms in salute.

Policia Nacional were forced to watch over the tribute through fears of a violent backlash.

Francisco Franco Bahamonde ruled over Spain as a military dictator from 1939 until his death in 1975.

He ruled with an iron fist and killed and tortured thousands during his five decade reign.