IT’S mushroom season again – and chefs around Spain are conjuring up a host of delicious dishes based around the wild autumn favourite.

From succulent Boletus to delicate Chanterelles and from marvellous Morels to perfect Portobellos there is such a variety here.

The rains of autumn bring out dozens of different types and each has its own specific flavour and complimentary dish.

The Serrania de Ronda, in Malaga, is said to have 30 different edible species alone, while each region of Spain has its specific varieties.

“It’s one of my favourite times of year,” explains chef Joan Marc, whose same name restaurant has been doing a brisk trade for six years in Inca, in Mallorca.

“I love pairing the different types with meat and fish as well as just serving them on their own.”

He has come up with a fantastic 8-course mushroom tasting menu which includes an original black truffle ‘cocao blini’.

The chef, who trained at legendary two Michelin-starred Can Fabes in Sant Celoni near Barcelona before refining his skills under his ‘godfather’ Marc Fosh in Palma, now has his own red meals status with Michelin.

This was the very definitive taste of autumn with its locally grown white beans as a base. 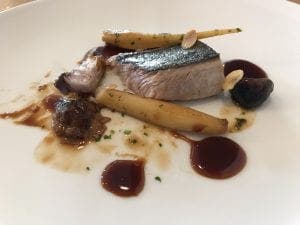 The duck terrine with black trumpet mushrooms (right) was also delicious, while the true winner was the stewed beef cheeks (carillada) with Boletus.

The dorada served with shititakes was also a stunner.

“It has taken him years but now he has a few dogs trained up to find them,” explains Joan. “They are best in December and January.”

The eight course menu came in at 65 euros a head while a shorter four course number weighed in at just 41 euros including iva.