MOUSTACHE – or bigote, if you’re Spanish – is the word on everyone’s lips as the global grow-a-mo-in-November campaign gathers momentum.

Millions are raised for research into men’s health issues through the simple act of cultivating a lip sweater and five million supporters – Mo Bros and Mo Sistas – sign up for it every Movember. NB: Ladies are not required to grow facial hair although they are at liberty to join in Have Sex with a Guy with a Beard Day (November 18). Well, it is for charity.

But I very much doubt that anyone’s efforts will come close to the gravity-defying specimen sported by Catalan artist Salvador Dali when he was alive … or even when he was dead, for that matter.

If you’ve read the press coverage about the artist’s exhumation in September over a (false) paternity claim, you’ll know that after spending 28 years in a crypt below his museum in Figueres, his trademark ’tache was found perfectly intact and still ‘pointing (like the hands on a clock) to ten past 10, just as he liked it.’

His embalmer was so impressed he called it ‘a miracle’. It’s certainly a miracle the tourist board wasn’t tempted to snip it off for display in the museum before putting its owner back in the ground.

Movember.com voted it the Most Famous Moustache of All Time in 2010 and the surrealist himself claimed: “It’s the most serious part of my personality. Like two erect sentries, it defends the entrance to my real self”.

He styled it on the moustache of Velazquez, one of the artists he most admired … and went on growing it. At its max it measured 25 centimetres and reached up to his eyebrows. 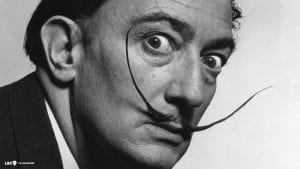 He waxed and twisted it into weird shapes and even used it as a paintbrush, claiming his twin facial bristles were antennae that could pick up creative inspirations.

Ever the joker, he once explained: “Since I don’t smoke, I decided to grow a moustache—it is better for the health.

However, I always carried a jewel-studded cigarette case in which, instead of tobacco, were carefully placed several mustaches … I offered them politely to my friends: Mustache? Mustache? Mustache? Nobody dared to touch them. This was my test regarding the sacred aspect of mustaches.”

For posterity, along with his better-known artworks, he also left us Dali’s Mustache, a photographic Q&A exploring his psyche through 28 images of his most distinctive facial feature – adorned with flowers, poking through the holes in a Gruyere cheese or contorted into a dollar sign and captioned: Question: I have the feeling I have discovered your secret, Salvador.

Could it be that you are crazy? Answer: I am certainly saner than the person who bought this book.

Of course, unlike a true Mo Bro, Dali was only ever in it for the Mo-ney. He used to doodle on his cheques before paying his bills, knowing they would never be cashed as the art was worth more!  But he was unquestionably ‘a man of character’ – or ‘un hombre de bigote’ as the Spanish say, in Dali’s case never more aptly! 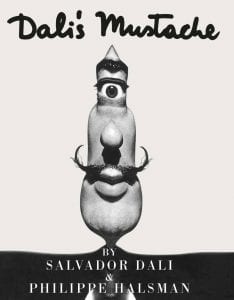 Etymology note: Bigote is said to originate from the Reconquest of Granada when Swiss German crusaders fighting for the Catholic Monarchs used to scream ‘Bei Got’ (by God) as they charged the Moorish hordes.

The only soldiers sporting moustaches (everyone else had beards), the Spanish nicknamed them ‘los bigotes’ and, like a false moustache, the word stuck. They were also fearless men of character – ‘hombres de bigotes’.

Five of the most important contemporary Spanish artists