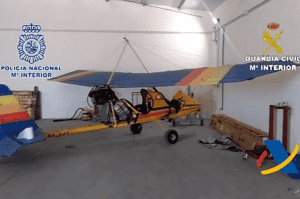 A DRUG smuggling cartel has been busted building a private airfield in Andalucia in a bid to fly in cocaine from Morocco.

Some 14 suspected members were arrested while 5.1 tonnes of hashish, six inflatable boats, two light planes and a helicopter were seized in various locations across Andalucia.

Police say the group is used the boats and aircraft to smuggle hashish from Morocco into Spain.

They described the network as ‘one of the main hashish trafficking organisations that operated in the south of Spain’.

“The detainees were in the process of buying land to build an aero club which would allow them to start bringing in cocaine by seaplanes,” a statement said.

Spain is a key entry point for drugs coming from Africa and south America.

Pablo Escobar used the route to expand his billion-dollar empire into Europe.