A LORRY driver has died after crashing through roadside barriers at La Cala de Mijas after losing control of his vehicle.

The Moroccan driver, who was apparently transporting a cargo of tomatoes, then plunged down an embankment off the A-7, overturning onto the beach.

Firefighters attempted to free the driver from the vehicle but the Moroccan had already died from the injuries sustained.

“After falling down the precipice, he was captured inside the vehicle,” Manuel Morales, Mijas Fire Chief told the press.

“They tried to revive him after taking him out but were not successful.”

The tragic incident occurred near kilometre 202 on the coastal road, an area which is known as an accident blackspot.

A similar incident occurred in January of this year when another truck crashed through barriers on the same section of the road, crashing onto the rocks below.

On that occasion the driver survived. 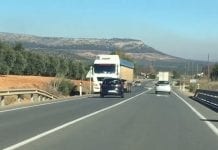 WATCH: Motorist in Spain’s Andalucia drifts on to wrong side of road and crashes into lorry 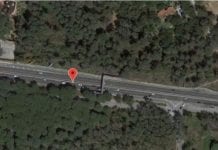