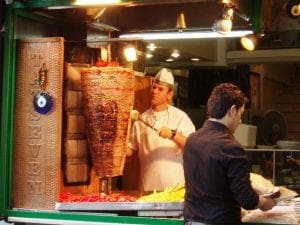 DONER kebabs will not be banned in Europe.

It comes after EU politicians voted on a proposal to ban phosphates, deemed necessary to keep seasoned kebab meat moist.

The politicians had argued it negatively impacts health and is linked to heart disease.

But the move was voted down by three points in the EU parliament today.

The issue arose when the EU’s executive commission proposed to officially authorise the use of phosphates in lamb, mutton, beef, or veal.

The Health Committee voted 32-22 to oppose it, following recent studies indicating the additive put people at a greater risk of heart disease.

“They are looking for ways to hurt Turkish businesses here,” said Baris Donmez ahead of the vote, the owner of a 24-hour kebab bistro in Berlin’s Mitte district.

“Such a ban would be the biggest pile of garbage imaginable.”

“If the European Parliament gets its way, this would be the death sentence for the entire doner kebab industry in the European Union,” Kenan Koyuncu of the German Association of Doner Kebab Producers told Germany’s Bild daily newspaper.