THE average tax bills of citizens in Malaga’s different municipalities have been revealed – and the differences are huge.

The amount of taxes paid by citizens is what is known as ‘tax pressure’, which represents the percentage of income they contribute. 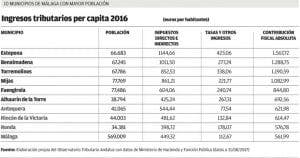 The tax burden in a city is the percentage that each citizen contributes through the payment of taxes.

The latest data has been provided by the Fiscal Observatory of Andalucia, which has collected the information from the Ministry of Finance.

Marbella and Vélez-Málaga have not offered their figures.

The political colour of municipalities is not decisive when it comes to demanding tax collection, since the PP rule Estepona and Fuengirola, the PSOE in Torremolinos and Benalmádena, and Ciudadanos in Mijas.

After the crisis in 2008, some municipalities agreed to raise taxes to stave off disaster and maintain balanced municipal economies.