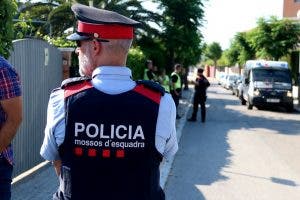 A POLICEMAN in Catalunya has been suspended without pay after filling out reports in Spanish.

Mossos d’Esquadra, the region’s police force, is preparing its case against the officer for his ‘lack of consideration and respect’ towards his superiors.

According to El Mundo, the unnamed officer was reprimanded by the squad sergeant for repeatedly filing case reports in Spanish.

This went against an internal memo from several years earlier, which told all officers to strictly use Catalan.

The Mosso officer refused to write in Catalan after being called in by his seargent, and instead called in three colleagues to hear their opinion.

He went on to call the ban on using Spanish ‘illegal’ and ‘arbitrary’.

The events took place in October 2016, but the case has just been opened against the ‘defiant’ officer, who is currently serving a 16-day suspension without pay and could face more time out of work.

“He created a hostile environment with his defiant behaviour, and his demands and arrogance lasted for some time,” the formal complaint reads.

But his lawyer argues that it’s just an attempt to distract from his client’s ‘opposition to illegal orders’.

The Mossos d’Esquadra’s official language regulations states: “The use of Catalan may be normal or common, even preferred…but never exclusive”.