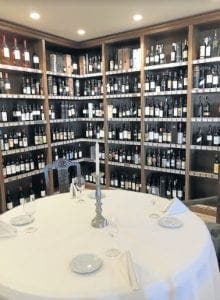 WITH 330 references it claims to have the biggest sherry wine list in the world.

Row upon row of fabulous amontillados, finos and olorosos line the walls of this fantastic new restaurant in Torreblanca.

Many of them are over 30 years in age and a fair chunk get 100 points from Robert Parker.

“There is a restaurant in Japan with 290 different sherries,” he explains. “But there is nothing like this in Spain.”

If credentials are needed to run such a place, owning a vineyard or two certainly helps.

But, as far as Bernardo is concerned, his 2.5-hectare estate in Riax Baixas, where he produces his fine albarino Estrada Vello, is irrelevant.

So is his local vineyard in the hills above Mijas, where he now produces no less than five different wines.

After all, he spent five years studying winemaking in Galicia (not to mention working in restaurants in London) before making the plunge and opening his wine distribution business in Mijas, half a decade ago. 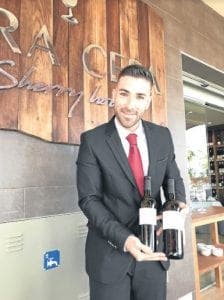 What began as the wine shop, Pura Cepa, is now one of La Cala’s finest places to tapear. There are always more than 40 wines by the glass and around a dozen fabulous tapas to dip into.

There is also an amazing list of gin and tonics, should you decide for something stronger.

But his new venture on the outskirts of Fuengirola is something else entirely. As well as its size, Sherry House sits in pole position overlooking the beach towards, appropriately, an offshore mussel farm.

The sort of menu you’d expect to find in Marbella or Madrid, there is an excellent mix of starters, including charcoalroasted leeks with Nantey cream, soft shell crabs and a fabulous crostini of pumpkin with ricotta cheese.

There is also a light tasting menu of seven courses at 39 euros, or a larger 11 courses at 59 euros.

Both have the option of accompanying wines, a good few of them sherries, of course. 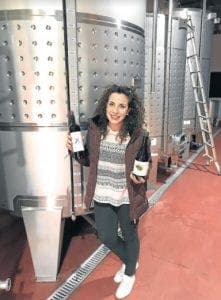 I went a bit off piste and tried a risotto of boletus mushrooms with truffle and shavings of parmesan, then a fantastic dish of roast sucking pig, in a rich gravy sauce cooked for an impressive 48 hours.

I tasked the sommelier to bring me out two different glasses of sherry and no more (I was driving) and he came up trumps with an amazing amontillado from Williams and Humbert (appropriate for a guiri), followed by an unusual cream sherry Urium, which was delicious.

All that was left – after the superb ‘Kinder egg’ dessert – was to get in the car and take the ten minute drive up to their vineyard, Malvajio, which sits at around 300m above sea level.

An extraordinary spot, which is one of the most southerly vineyards in Spain, here Bernardo grows three different grapes, including Cabernet and Shiraz.

Easily the most interesting wine is tete de cuvee, Carnibal, a red, which sits for 28 months in French oak, and his extremely unusual chardonnay that is grown near Ronda. Sherry good indeed!