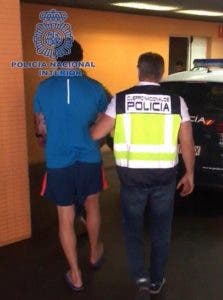 A BRITISH fugitive accused of slashing three people in the face has been cuffed while on the run in southern Spain.

The unnamed suspect, 36, was held in Javea on the Costa Blanca on a European Arrest Warrant.’

It comes after he allegedly slashed three men in a nightclub in Liverpool following an argument on December 21, 2016.

The main victim needed more than 100 stitches following the attack at the Soho nightclub.

Merseyside Police had issued CCTV images of a man they wanted to speak to about the savage assaults.

A Policia Nacional spokesman said: “A British fugitive aged 36-years-old has been held on a European Arrest Warrant.

“He is wanted by the British police over an alleged knife attack on three people at a nightspot in Liverpool.

“The incident followed a row between two people which resulted in the arrested man allegedly taking out a knife and stabbing another in the face.

“The other two casualties were customers who went to the victim’s aid. 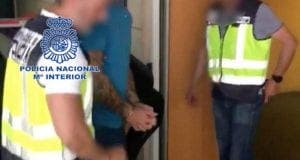 “A bouncer managed to eject the offender.

“The main victim needed more than 100 stitches to his face and was left with emotional and physical scars.”

The exact location of the arrest has not been revealed, although it happened outside a property where the fugitive was living.