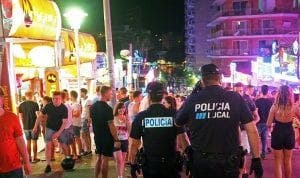 BRITS heading to Magaluf have been warned that a gang of 20 teenagers are robbing and attacking drunken holiday makers.

The Spanish Civil Guard has stated that the teens from Majorca aged from 18 years old are targeting tourists who appear intoxicated.

They have been spotted in smaller groups of five or six and are scoping the popular bars and clubs on a Friday and Saturday night, specifically targeting the popular Punta Ballena strip.

The gangs are approaching tourists and attempting to steal jewellery, bags & wallets and physically attacking anyone that resists.

Although there are a number of incidences similar during previous summers, the increase this year has been described as a “new phenomenon”.

Locals have been urging the authorities to take more strict action with patrols and heavier fines.

Anyone heading to the popular party town of Magaluf in Majorca has been given warnings to keep vigilant.

From Moors to modern hub:  A look at the illustrious history of La Alpujarra in southern Spain