SEVE slices expertly through the leg of jamón Ibérico, clamped on a jamonero to hold it in place. In moments, 11 wafer-thin slivers are placed in front of us on a gold-trimmed plate: cuts of babilla on the left, maza in the middle, punto on the right.

Jose Severiano Sánchez García “Seve” is a maestro cortador, in charge of the slicing the delicately cured ham. And he’s just one of many individuals involved in this lengthy field-to-table process.

Our journey of discovery begins in Jabugo, a charming town in the heart of Huelva’s Sierra de Aracena y Picos de Aroche nature park. Here you’ll find the curing cellars of Cinco Jotas, one of the oldest and most widely-respected jamón brands in Spain for their acorn-fed 100% Iberian ham.

The cellars were built over a century ago and provide an intricate account of the entire artisan process. It all starts in the dehesa with Iberian pure-breed pigs, the only animals of the species that have fat distributed throughout their bodies, creating the veins of white that run through a slice of jamón. Once the pigs are mature and fit enough to fend for themselves at around 100 kilograms, they are released into the dehesa, a Mediterranean forest managed by humans. The pigs cover a distance of 50 km and devour four km of grass every day, giving the meat its characteristic lean muscle. For around ten months, they forage for food, gaining about a kilo of weight a day.

The montanera is pig heaven, a period of three-to-four months ending around January or February when the acorns (bellotas) fall from the oak trees in the dehesa. During this time, the pigs live almost exclusively on acorns, eating up to seven kilos a day until they weigh around 160 kilograms. This diet is crucial. Acorns are rich in fatty oleic acid, also found in olive oil, giving the jamón its rich aroma, shiny texture, and olive oil flavour. The locals often refer to Iberian pigs as ‘olives on legs’. Jamón de Bellota 100% Ibérico is known as the healthiest cured meat on earth, rich in high density protein, good cholesterol and Vitamin E.

After the plentiful montanera, the pig is mature at about two years old and over the winter, they meet their destined fate at the matanza (slaughter); or as the people of Jabugo put it, the ‘sacrifice’. Then, the curing process begins.

Three maestros take part in this final journey lasting around 18-30 months: the maestro de salazón, maestro perfilador, and maestro de secadero. These three figures, respectively, are responsible for packing the fatty legs in sea salt, carving off the excess fat and drying the carefully-prepared leg in the curing cellar. They are absolutely essential for the final delivery of that fine cut of jamón to our plate.

Legend has it that jamón was first ‘invented’ when a pig fortuitously stumbled into a channel with very salty water and drowned. When the townspeople roasted the deceased pig they were pleasantly surprised at its rich, aromatic taste. They later found that the hind leg could be preserved longer and given deeper flavour when it is salted.

The maestro de salazón covers the fresh and fatty legs of Ibérico pigs in sea salt for approximately a week. After the salt is washed off the legs are stored in a cold room for one to two months to allow the salt to penetrate through the skin to the flesh.

Next, the maestro perfilador steps in to trim off the excess fat which speeds up the drying process. Then the legs are hung from the metal hooks that line the ceilings of the curing cellar, where the magic happens. During the drying period, the leg loses half its weight as fat drips away. As the seasons pass, mould forms causing chemical changes on a cellular level, creating the complex flavours.

At last, the maestro de secadero conducts the puntatura – sniff test. The maestro at Cinco Jotas inserts the cala – a short needle made of horse bone – into the jamón and determines whether it’s ready with the briefest of sniffs yet in those few seconds he can discern more than 100 aromas.

All these steps ensure a perfect balance of many different flavours: sweet, savory, silky, tangy, and many more.

With a newfound appreciation for the complexities of jamón making (and growling stomachs), it was time to savour the jamón in front of us.

García, who has worked at Cinco Jotas for over 27 years, recommends we try it with a glass of dry sherry and tackle the cuts from left to right.

First, the babilla from the part commonly called flank steak. These deep sheets of red are pleasant and chewy, with a mild taste that isn’t too overpowering – a great starter.

The maza is the juiciest, most aromatic cut on the hind half of the jamón. The intense, creamy taste hits first but the pungent and explosive aftertaste leaves us craving more.

The punta has the greatest intensity of flavour as all the sweetness and spices from the oxidation process collect here, at the hip end of the leg, as the fat drips down. These thin slices pack concentrated savoury flavour in every bite.

So now you know. But, can we really say that Jamón de Bellota 100% Ibérico is the world’s best jamón? After one tasting we’re not qualified to judge. But if there is such a thing as perfection, it comes pretty close. 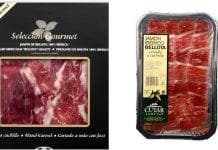 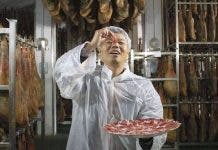