“THE English ceased to be one of the most aggressive, brutal, rowdy, outspoken, riotous cruel and bloodthirsty nations in the world and became one of the most inhibited, polite, orderly, tender-minded, prudish and hypocritical.”

So said British historian Harold Perkin in reference to England’s Victorian Age. More than anything else, Perkin saw the era (1837-1901) as one of sexual restraint, rigid morality and a strict code of conduct. Indeed!

However, there was so much more to the era. The Industrial Revolution was at its apex and saw many British technological innovations. It was England’s Imperial Century where ‘the sun never set on the British Empire’. It was also the Age of Literacy.

Both the desire and the ability to read and write soared exponentially as literacy for all became paramount in public consciousness. This was the time of Dickens, Tennison, the Bronte Sisters and Thomas Hardy, when penny novels and serialised fiction were immensely popular. Newspapers were coming of age. Advertising for the masses was in its infancy. Libraries were being established along with competing publishing houses. And the Foster’s Education Act (1870), a milestone in educational development, set the framework for public schooling for all children aged five to 12.

But it was the discovery of an inconspicuous Andalucian roadside weed that changed the way Victorian Britain learned.

If there was one common denominator in Britain’s rise in literacy, it was the need for paper – but papermaking in 19th-century England was far from cutting edge. It was primarily made from old cloth rags combined with wood pulp but supplies were limited and the manufacturing process crude, labour intensive, expensive and dirty.

Experiments in using other materials – everything from sawdust and bamboo to hay and cabbage stalks – had produced less-than-perfect results, until manufacturers discovered esparto.

This unassuming grass indigenous to north Africa and southern Spain – commonly used today in everything from shopping baskets to espadrilles – was found to be the perfect base for paper. Its fibres and cellulose properties produced a very durable, soft, clean paper which held ink well and could be produced at a fraction of the cost.

In 1839 the first patent to manufacture paper from esparto was registered in England. Paper prices dropped by as much as 75% as public demand for print soared. 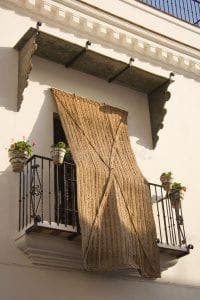 It was then transported using British-built and controlled railways (e.g. The Great Southern Spain Railway), to the coastal ports of Aguilas in Murcia and Cartagena, loaded onto company-owned steamboats and shipped to Great Britain.

The quantities of exported esparto to Britain were so vast that the loading docks required special canals to handle the increased barge traffic. One canal at the mouth of the Wandle River and the Thames even became known as McMurray Canal. At its height, the corridor between Granada, northern Almeria and coastal Murcia exported 31,000 tonnes yearly, making esparto Spain’s leading export second only to iron-ore.

World War I was the death-knell for the industry as shipping was disrupted and new papermaking technologies became more profitable. But for almost 100 years the symbiotic relationship between Andalucia’s esparto and Great Britain’s thirst for paper was a net positive for both countries. Spain had a valuable cash crop and Victorian England’s demand for paper – the medium that made mass literacy possible – was met.

It’s probably a misnomer to dismiss esparto as simply a ‘weed’. Granted, it’s considered a nuisance, especially among olive growers; but it has been a part of Andalucian material culture for millennia.

Archeological discoveries have uncovered esparto baskets and mats as far back as the Neolithic Age roughly 7,000 years ago. The Phoenicians, Greeks, Romans and Moors used it in ropes, shoes, harnesses, blankets and more.

Today, although it has given way to new technologies, esparto is making a bit of a commercial comeback. It is still used to produce a higher-quality premium paper for books, diplomas and important documents. In the home fashion world, Amazon features chic esparto designer rugs and wall hangings. And chemists have recently discovered that the lining of the esparto plant, much like flax oil, has a beneficial antioxidant quality.

Esparto’s fortunes have varied over time but for Victorian Britain this humble grass played no small part in transferring knowledge to the vast majority of literate Britons. American poet Ralph Waldo Emerson said it best: ‘What is a weed? It is a plant whose virtues have not yet been discovered.’

– Rags and discarded cloth were in such acute demand during the early Victorian Era that there were actually ‘rag wars’. England prohibited rags to be taken out of the country and rag smuggling became a lucrative enterprise among black marketeers.

– Recent archaeological discoveries at Las Cuevas de los Murcielagos in Cordoba and Abunol in Granada confirm that esparto has long been a part of Andalucian material culture. Many of the artifacts are on display at The National Archaeological Museum in Madrid.