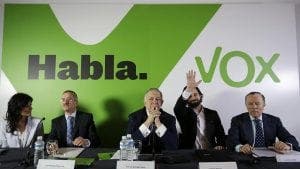 A SPANISH far-right party has attracted thousands to a rally as polls indicate it could win a seat in Congress.

Vox, founded in 2014, drew its largest ever crowd with some 9,000 supporters showing up to the Madrid rally at Vistalegre Palace.

The party has revealed plans to revoke Spain’s gender violence law and to deport ‘illegal immigrants who come to Spain not to make it greater, but to receive handouts.”

Secretary general, Ortega Smith, took to the stand to quote US President Donald Trump saying, “Together we will make Spain great again.”

An opinion poll suggested this week that Vox is painstakingly close to earning a seat in Congress with a predicted 1.5% of votes at the next general election, scheduled for 2020.

Vox’s key message has resonated greatly with supporters who have expressed concern over defending Spain under the threat of Catalan separatists, illegal immigration and attacks on family values.