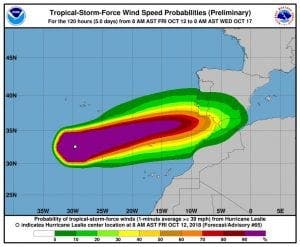 A TROPICAL storm could be heading towards southern Spain.

Hurricane Leslie is currently on a trajectory towards the gulf of Cadiz, according to the Miami Hurricane Centre, and could land in the next two days.

Spain’s weather agency AEMET has announced that the most recent forecasts about the progression of Leslie, located in the center of the Atlantic Ocean, has changed in the last few hours.

Its projectory has switched from landing in Portugal to hitting the gulf of Cadiz by Sunday.

AEMET had said the information provided by the National Administration of the Oceans and the Atmosphere of the US Government (NOAA) and the Hurricane Center of Miami left two possible scenarios.

“Leslie, already weakened, will go to the Gulf of Cádiz or turn towards the Canary Islands,” it previously said.

The latest forecast is a 50 – 70% probability that Leslie will reach the Gulf of Cadiz in the coming days as a tropical storm with winds of more than 70 kilometers per hour.

AEMET has not yet issued a warning as the forecast is still ‘uncertain’.