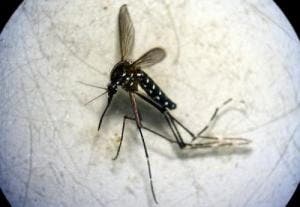 A THIRD person has acquired dengue fever in Spain.

The Ministry of Health confirmed last week that the third person to be infected belongs to the same family as the previous two cases reported earlier this month.

All three people began showing symptoms during the second half of August during a trip to Cadiz.

All three had not travelled abroad, meaning the dengue virus was acquired in Spain.

The trio, two who reside in Murcia and another in Madrid, are believed to have fully recovered.

Investigations are currently underway to determine where the mosquito bites may have taken place in order to implement measures for mosquito control.

Dengue fever is an infectious disease carried by mosquitoes and caused by any of four related dengue viruses.

It used to be called ‘break-bone fever’ because it sometimes causes severe joint and muscle pain that feels like your bones are breaking.

People get the dengue virus from the bite of an infected Aedes mosquito (tiger mosquito).

It is not contagious from person to person.

Experts have not yet expressed alarm for the dengue cases but are concerned about the potential arrival of other diseases in the future.

“Spain is a place where all the characteristics merge so that sub-tropical infectious diseases can emerge,” Rogelio López-Vélez, a researcher at the National Reference Unit for Tropical Diseases of the Ramón y Cajal Hospital, told Teknautas.

The geographical position is key in these growing concerns.

The proximity to the African continent makes the Iberian Peninsula a key passage for migratory birds, animals that can be a reservoir of viruses or transporters of vectors that carry them, like ticks.

In addition, climate change causes the proliferation of insects that transmit this type of disease, such as the tiger mosquito, whose population in Andalucia has soared in the last two years.

Another fundamental factor is the growing influx of travellers and migrants, meaning an increasing number of people are arriving to Spain from all corners of the world, including Africa, South America and the Far East.

“All the conditions are met and if there are no more cases, it is because we have a spectacular health system,” added expert Lopez-Velez.

He recalled that diseases that threaten to return, such as dengue fever, were already present in the past: “We must remember that in the 19th century there was yellow fever in Sevilla”.

The triple threat of the tiger mosquito

The tiger mosquito (‘Aedes albopictus’) is a menace which is being closely watched by Spain’s experts.

Detected for the first time in Spain in 2004 in Barcelona, ??it has already colonised all the provinces of the Mediterranean, as well as some areas of Aragon and the Basque Country.

Its last conquest has been Extremadura.

“It is present in all the Mediterranean countries and survives the winter, so it is really no wonder that the first cases of dengue have appeared in Spain, it has already happened in Croatia, Italy and France,” explained López-Vélez.

In his opinion, ‘it is not striking or extraordinary’ and should not generate alarm, because dengue is a relatively mild disease, which causes fever and muscle pain.

Sometimes it is asymptomatic – in fact, it is probable that there have been other cases that have not been detected – and when it generates complications, the recovery is rarely complicated.

Deaths only occur in countries that lack a minimum health infrastructure.

The insect can also transmit Chikungunya fever and Zika, with similar symptoms.