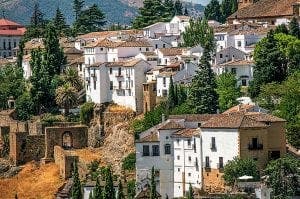 THE Serrania de Ronda property market is finally starting to go up again.

After years of flatlining prices and a shortage of clients, the number of buyers is rising, alongside the average price of properties.

“Thing’s have really picked up in the last couple of years,” explains local agent Zoe Males, of Olvera Properties.

“Last year was really healthy and the first half of 2018 was great, apart from the summer, which has been a bit quiet.

“There are also a lot more country property buyers in the €250,000 bracket these days,” she adds.

And this is no surprise given how stunning the countryside is around the area, with the landscape and views not dissimilar to the Highlands of Scotland or Snowdonia, but with sunshine.

The Welsh mother-of-four certainly knows better than most having worked in the area since moving there in 2004.

Today, she and her business partner Anne Marie handle just over 300 properties, stretching from Ronda to Zahara de la Sierra and from Olvera to Campillos.

“It’s a big area, but we know every listing inside out and are good at matching buyers with homes,” explains Zoe.

“Most of our buyers are British and thankfully while Brexit paused a lot of people it didn’t put them off buying in the long term and many of them are now back looking again.

“While they may have been petrified at first of the consequences, they are certainly not now.”

The company, based out of the market town of Olvera, some 30 minutes north of Ronda, finds its buyers from comprehensive marketing online and from attending shows like Place in the Sun in the UK.

“We also did a show recently in Belgium and have picked up at least one client so far,” Zoe adds.

She adds that there are some incredible good deals to be had there, particularly in the sleepy towns of Algodonales and Zahara.

It has definitely been a rollercoaster ten years for Zoe Males, who first moved to Mojacar in Almeria in 2003.

While today she is getting at least half a dozen enquiries from clients a week, this went down to less than that a month in the depth of the recession.

“We had been run off our feet in 2005 and 2006, with so many buyers, sometimes four to five a day to look after,” she explains. “In one week we actually sold six properties.

Thankfully the good times are finally starting to roll again and things are looking rosy.

“It’s good to see things coming back and I always knew they would,” she adds.