AN American expat has said she is ‘devastated’ after her dog becomes the 4th to be fatally poisoned at Lake Istan in less than a week.

Livia Taravella, 39, from Florida, was walking her pet Skye along the water’s edge on Sunday with husband Stefan, 55, when the animal became violently ill and died in just 15 minutes.

After the 13-month-old ratonero bodeguero andaluz pup began having seizures at around 4:10pm it was rushed to the nearest vet, but could not be saved.

The same day Skye was killed, another dog was also poisoned at the lake and two other dogs died after ingesting poison earlier in the week.

The Guardia Civil’s SEPRONA division are now taking water samples at the site and autopsies are set to be carried out later today.

“I just don’t know how to handle it,” the mother-of-one told the Olive Press.

“Why would someone put poison down by the lake, I don’t understand, why?”

Livia is on sabbatical and lives in the Cerros del Lago neighbourhood with her husband, a lawyer, just metres from where they took Skye for her final walk.

The heartbroken expat said: “Everything was fine until we got to the water.

“Then she drank it and played, she ate something like dogs do.

“Immediately her eyes began looking very droopy, she lost her balance and almost fell into the lake.

Despite the tragic pet deaths, another neighbour in Istan believes the dogs were poisoned by a naturally occurring algae or cyanobacteria that grows on stagnant lakes.

The unnamed woman told the Olive Press: “I live here on the lake where the dogs have died and this 100% coming from the algae.

“The lake is prohibited to swim in because it is stagnant, it’s not some local going around killing dogs.”

Livia, however, thinks her pet was poisoned.

She tried to keep her four-legged friend alive in the car on the way to the vet’s, but Skye died before they arrived.

The vet informed Livia and Stefan that the poison that killed Skye is a ‘strong kind that isn’t easy to get’.

Livia told the medical professional she had attempted to have a dip in the lake the previous day, and asked if she should be checked.

Despite saying she would be ‘OK’, the vet said the water ‘could be fatal for a small child’.

Livia filed a denuncia with the police in Marbella and maintains that the poisoning ‘was deliberate’.

She said: “It’s crazy, the poison is strong, it’s not something not everyone can get their hands on – that’s what the vet told me.

“I live right by the lake, it’s safe and the previous day I was even going to go and have a swim in it.

“There are tonnes of dog walkers where I live.

“Literally everyone has an animal here, a dog or a cat.

“People are shocked and no one knows what to do.” 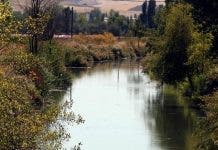