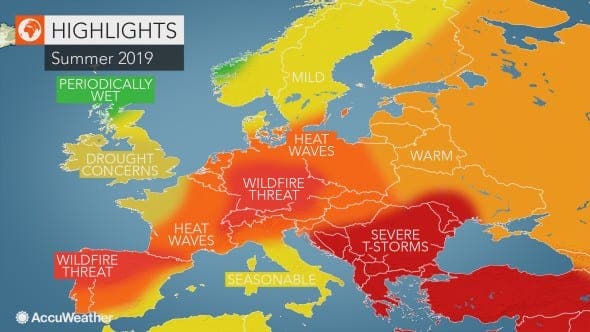 A SERIES of prolonged heatwaves are forecast to hit Spain from next month.

According to Accuweather, ‘long-duration’, ‘intense’ and ‘persistent’ heatwaves will spread from Spain and Portugal all the way to eastern Europe and will bring sweltering temperatures for months.

The high heat is forecast to arrive in June and will be much stronger than last year, which saw record-breaking recordings.

Spain is facing ‘multi-day’ heatwaves and could see temperatures reach a life-threatening 43C or even higher, according to Accuweather.

Accuweather said: “The biggest story of the summer is likely to be the long-duration heat waves that will grip areas from Portugal and Spain to Poland and Hungary.

“The heat will begin in June across the Iberian Peninsula before spreading north and eastward throughout the summer months.

“The heat will be more persistent than during last summer, when record temperatures were recorded in parts of Portugal, Belgium, the Netherlands, Germany and Scandinavia, but generally lasted for only a week or so at a time.

“Even when the most intense heat waves wane, it will be brief and temperatures will remain near or above normal before returning to dangerous levels once again.

“The hottest locations throughout Portugal and Spain will see multi-day heat waves with temperatures peaking at or above 43 C (110 F).”

The dry and hot weather which hit Spain this month has seen forest fires break out already.

Accuweather added that there will be high risk of more intense fires in Spain in the second half of the season.

It also warned expats and locals of the coming heat, especially those without air conditioning.

“Unseasonably warm nights will also be a concern during these heat waves, making for dangerous conditions as homes without air conditioning that will be unable to cool down before heat builds again the following day,” it advised.

“It will be important for residents and visitors to take extra care in the heat to prevent illness. Drinking plenty of water, spending time in the shade and wearing light clothing will be necessary.

“When possible, strenuous outdoor activity should be avoided during the hottest part of the day.

“Stagnant conditions contributing to the intense heat will also result in poor air quality, especially in and near cities. Air quality may also be worsened by smoke from wildfires.

“Children, the elderly and those with respiratory or cardiovascular health conditions should avoid spending time outside as much as possible when air quality alerts are issued.”