OVER 150 African migrants have made it to Spain after climbing over two huge fences into Ceuta.

At around 6:45am this morning a group of at least 153 people scaled the Spanish-Moroccan border at Benzu.

As soon as they arrived in the Spanish enclave the men raced towards the temporary immigration centre (CETI).

Video shows the men cheering, while doctors conduct medical checks on them, before they are processed and attempt to claim asylum.

Meanwhile around seven men remain on the border fence in a standoff with Guardia Civil after becoming tangled in barbed wire.

The immigrants, who are described as ‘young’ and ‘of sub-Saharan origin’ by local media had apparently planned the move for five months.

El Foro de Ceuta claimed the men ‘took advantage’ of early morning fog in order to evade the authorities at the border.

This effort by the immigrants to enter Spain is the largest since August, when 602 people are believed to have made the crossing.

The people of Benzu were heard shouting ‘welcome’, while there were even reports of locals helping treat migrants in their own homes. 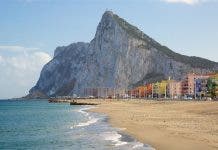