I’M still recovering from last month’s tumble when I managed to jangle most of the nerves in my left ankle.

The face-long sprawl down a friend’s steps and the resultant sprain meant that I have been hobbling around Marbella like an extra from Pirates of the Caribbean for the past few months – all crutches, bags and pouches about my person and frequently muffled oaths.

As a writer – though famously I was once derided as not being a ‘proper writer’ by an up and coming scribette who had the boho attitude, Frida Kahlo notebook and tome of Sylvia Plath poetry – I live by the mantra that ‘it’s all material’, and have made the following sage observations about life on one leg. The Flamingo Follies, if you will.

Being forced to be flat on my back, one leg in the air is not my favoured position in bed.

Stop sniggering at the back. It did, however, enable me to rediscover my love of reading.

I know that sounds like a particularly anodyne thing to say, but in a world where we would rather scroll and hit ‘like’, getting lost in a book is a rare pleasure.

I managed to finish three books in four days. And only two of them required crayons.

Moving on one leg also means that you live at a slower pace.

On my first day on crutches I misjudged a corner and ended up sprawling across the kitchen floor.

It was so painful that I invented an entire vocabulary that sounded like a cross between Dark Orcish and summoning the Balrog.

From that point I did everything at half speed, and there is a rather satisfying feeling when most of your morning is spent carefully preparing lunch.

Even though one leg was out of action, there are health benefits as well. Propelling yourself around on crutches requires employing upper body strength and I even started to get ‘definition’ around my abs.

Spraining an ankle is not a training programme that I would recommend, but there is an upside!

Finally, people in general are happy to help. I’ve had doors opened, shopping trolleys pushed and even heavy items carried for me, confirming that, despite my dark and twisted worldview, there is a glimmer of good in everyone.

Luckily I’m due to watch Joaquin Phoenix in Joker later, so abnormal service will be resumed… 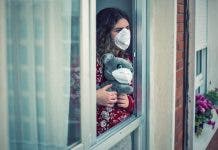