MY language-learning journey didn’t start in Spain but some 1,200 miles away in the rain-battered classrooms of Rochdale and Oldham.

For some reason, pupils at my secondary school (think Grange Hill on steroids) were forced to take German or French. So from Year 7 I was grappling with the ‘language of love’ in a classroom where no love was lost  – dodging flying chairs and stationary, ploughing through battered textbooks that doubled as goal posts for football practice and dictionaries covered in the kind of graffiti that created dividing lines between friends.

By the time Spanish hit the school, I had already scraped a C in GCSE French and vowed never to learn a language again.

But six years later, I walked out of Malaga Airport, having booked a one-way ticket from Manchester to come and work for the Olive Press. And as I stood, sweating in a ridiculous parka coat – which I later realised you do need on the Costa del Sol – it was clear a bit of Spanish would probably come in handy.

First there was the bus ticket office to negotiate – handing over euros with pleading eyes only gets you so far. Then there was the grumpy driver, later on Mercadona, later still the really exciting bit: the Spanish bar.

On the advice of a mate back home, I immediately got stuck into the Coffee Break Spanish podcast. Its 20-minute segments took me from the two words I knew, hola and gracias (seriously), to hundreds of sentences and potential conversations. I also explored the apps Memrise and Duolingo to varying levels of success but managed to pick up a lot over several months.

I thought everything had finally clicked when I triumphantly finished a phone call (entirely in Spanish) with a cafe-owner who charged her customers for ice (Cent-imental, pg 40, Issue 326) – only to be asked by our Andalucian graphic designer: “Why are you speaking Mexican?”

Nor was I getting anywhere with my neighbours – three elderly Andalucian women, one part-deaf, one extremely rude (though one of them seems nice).

After trawling the web for local clases de español – some of which charge €40 an hour – I came across Millinguals in Estepona whose website offers Spanish classes and ‘an intensive Andalusian experience’.

It immediately conjured up visions of my three abuela neighbours hurling gazpacho at each other. But the price was good so, cold soup-slinging aside, off I went to meet Carola, potentially my new teacher.

Let’s just say our first meeting could have gone better…

I don’t know what ‘Oh my God I’m so sorry, I can’t believe I just accidentally caught the cable from your wireless router around my chair leg and pulled it off the wall and smashed it’ is in Spanish. Maybe she’ll tell me next time… 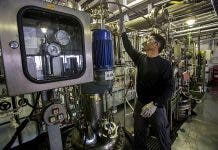