DOZENS of police officers, politicians and businessmen have been charged in Mallorca’s worst ever corruption case.

A total of 35 people – also including civil servants and lawyers – are to be prosecuted over their links to Mallorca’s infamous businessman Tolo ‘King of the Night’ Cursach.

The group are being charged over their links to the nightclub mogul, who allegedly bribed and corrupted the island for decades.

They include two former police chiefs and two Palma town hall bosses, all of whom are alleged to have taken money or other bribes in return for special favours.

Judge Enrique Morell has charged them with a total of 15 crimes, including extortion, trafficking of influence, blackmail, false documentation, corruption and crimes against public health.

Many of them, including 11 local policemen are accused of partying with prostitutes in Cursach’s numerous nightclubs including Tito’s in Palma.

They are accused of taking cocaine, alcohol – and even free sex – at the various clubs over many years.

They include the former police chief Juan Miguel Mut, head of the Patrulla Verde, Gabriel Torres, and head of Palma security Guillem Navarro.

It comes after a long investigation into the affairs of businessman Bartolome Cursach, previously under the judge Manuel Penalva and public prosecutor Miguel Angel Subiran.

The Judge strongly attacked the officers, who he has probed in a shocking 50 separate cases of blackmail and threats between 2009 and 2016.

The case has now been broken up into two parts, the crimes of the police and those of the civil service.

In particular, the officers are accused of supporting Cursach and his businesses, protecting the clubs from harassment.

Rival nightclubs and anyone opposing him would be routinely harassed and intimidated by the officers, while also receiving excessive inspections.

The prosecution is asking for eight years in jail for the officers, who have entered a plea of not guilty. 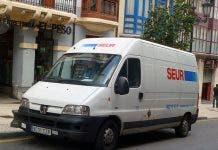 Staff Reporter - 24 Sep, 2020 @ 09:00
SEUR is accused of lying to customers, failing to deliver parcels, providing a phone number that doesn't work and an email address to which an automatic reply says the package does not exist and is therefore not deliverable