UK Prime Minister Boris Johnson has once again backed Gibraltar in London meetings on the future relationship with the EU.

Picardo was in the UK capital for a meeting of the Joint Ministerial Council between the UK and Gibraltar Governments.

The Gibraltar delegation is in London for a meeting of the Joint Ministerial Council between the UK and Gibraltar Governments which took place on Friday.

“The Chief Minister presented the Prime Minister with a Gibraltar Rugby branded baby grow with the number 10 on the back,” said the Gibraltar Government.

“The Prime Minister was once again very forthright in his support for Gibraltar and its people.

“There were also detailed discussions all day with officials at the Foreign and Commonwealth Office and Task Force Europe about Gibraltar’s future relationship with the European Union.” 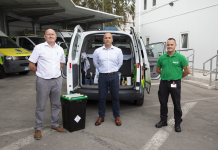