AS locals emerge from their homes after the general lockdown ended yesterday, the new normal is proving a challenge.

Locals are now able to go out freely, as long as they do not assemble in groups of over 12 people and they keep their social distance.

It forms part of phase two of the ‘Unlock the Rock’ plan which granted people freedom of personal movement from May 22.

Friday night is the traditional partying night in Gibraltar and it is likely that many young people wanted to get together with friends after two months of separation.

With all bars and restaurants closed until June, they responsibly chose a location far from residential areas in which to do that.

Despite this, some 300 people were dispersed by Police while drinking at Little Bay last night while not following social distancing rules.

The Royal Gibraltar Police said that all those in this incident were ‘fully compliant’ to the instructions given by officers and that Little Bay was closed afterwards.

“These types of gatherings in such large numbers are completely unacceptable,” said the RGP.

“Apart from being in breach of current regulations, they are contrary to Public Health advice to maintain social distancing in order to prevent the spread of the COVID-19 virus.”

It comes after there was some confusion why people were at Gibraltar’s beaches ‘for hours’ yesterday.

Today there were less people on the beach although most of them had sun umbrellas, which suggested they were unlikely to stay for just half-an-hour.

Although unclear at first, the government has now stated that the 30 minute rule is only imposed ‘if the beaches become crowded and social distancing is not possible’.

With police presence at all beaches, officers on the ground will now be able to make the call whether to go to the 30 minute rule if necessary.

There are still five active cases of COVID-19 on the Rock, two of which are cross-frontier workers, meaning they are not based locally.

Many cultural establishments have been preparing to open their doors once again from May 26 while having measures in place to fight against COVID-19.

John Macintosh Library, along with the library’s cafe’s takeaway services, will be open to the Public as from next Monday.

Gibraltar Cultural Services said that the library will open to ‘exclusively focus the opening on the lending of books’.

However, the computers and reference library at the trust-governed site will be closed for now.

After being placed in a ‘Book Bin’, staff at the library will disinfect all returned books.

The Garrison Library, keeping some of Gibraltar’s oldest books, will also be open via appointment only from 9am to 1pm.

Only six people will be allowed in the library at a time, but online research inquiries can be made from 9am to 5pm by contacting 200 77418.

Those who enter the library will be provided face masks and cotton gloves to handle books.

Following the closure of Gibraltar’s galleries just two months ago, they will be making a return from May 26.

This includes the GEMA gallery, which will open on Mondays, Wednesdays and Fridays from 11am to 3pm and Tuesday and Thursday from 11am to 6pm.

The Fine Arts Gallery and the Mario Finlayson National Art Gallery will be open Monday to Friday from 10am to 2pm.

The GCS said all three galleries will have the number of visitors ‘strictly controlled’, with hand sanitiser being provided.

In the Government’s ‘Unlock the Rock’ phase three starting from June 1, restaurants will finally be able to have customers take a seat at their tables.

“Applications will be considered and permits will only be granted where processes and procedures are deemed satisfactory, so as to minimise the risk of infection,” said the Government.

Application forms can be received from admin@eag.gi and completed forms should be sent to the same address.

Fitness fans will be happy that gyms are now open and personal trainers can now start helping people shift the lockdown pounds.

A total of 16 permits have been awarded to gyms after a video meeting with health officials where the new health restrictions were explained. 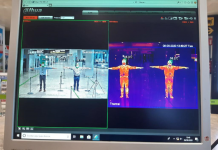 John Culatto - 2 Jul, 2020 @ 16:58
SIX raids on residential addresses on the Rock were carried out this week by the money laundering investigation unit of the Royal Gibraltar Police.