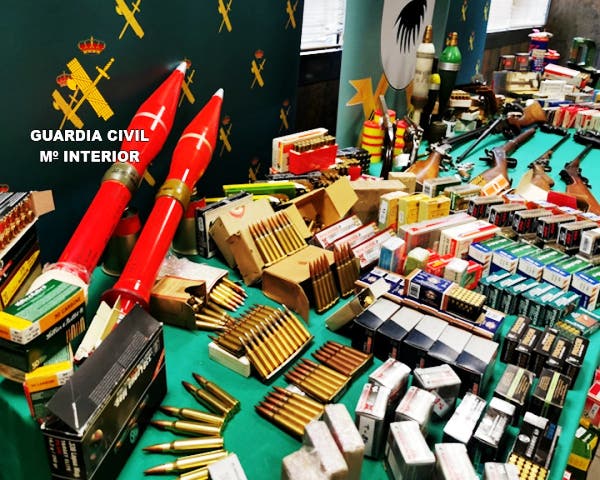 A BREATHTAKING haul of guns, missiles and ammunition has been seized by Spain’s Guardia Civil.

Sources describe the foiled operation as the largest online sale of firearms the country has seen.

Four people have been arrested, with thousands cartridges, scores of firearms, various explosive devices, projectiles, primers, gunpowder and tools used for the manufacturer of more ammunition.

Investigations began in 2018 when a Madrid man was found selling ammunition to owners of illegally-owned weapons.

He ran a secret workshop producing cartridges and adapting other weapons, all sold online.

These pictures give an impression of the scale of the seizure, but sources have released a full list of what was found, intended for sale online.

This operation was part of the Comprehensive Plan for the Control of Firearms (PICAF) of the Civil Guard.

Since it’s 2015 inception, more than 85 operations have been carried out against arms trafficking networks with 404 people arrested.

More than 4,500 firearms have been seized, over half a million cartridges, 183 kilos of explosive substances and 18 clandestine workshops have been dismantled.