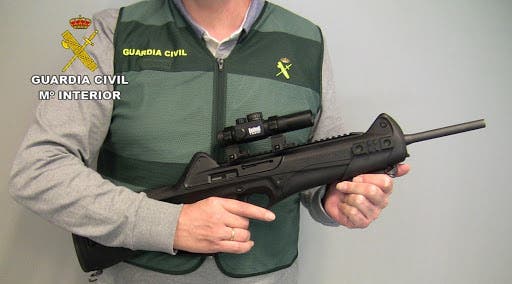 AN ARMS trafficking gang that shipped in weapons from Eastern Europe to sell to Spanish criminals has been busted by the Guardia Civil.

Nine people have been arrested in a nationwide operation that included the Romanian ringleader based in Alicante Province.

Six others are still being investigated in a case led by an Alicante court.

The imported weapons were mainly designed for detonations and were converted to use live ammunition in an Alicante area workshop.

Criminals across the country were then supplied with the illegal goods.

The Guardia move against the importers was helped with information supplied by authorities in the United States and Romania.

17 raids were made at the end of the 18-month long operation that took in Alicante Province and the Murcia region as well as the Granada, Madrid, Barcelona and Zaragoza areas.

Besides seizing weapons, ammunition, and drugs, two briefcases were found that had bogus Guardia Civil and Policia Nacional insignias on them, along with fake ID cards, and a Policia Local bulletproof vest.

The Romanian gang leader had operated in Alicante Province for a number of years and was wanted for similar activities in his native country.

The guns were sold in deals done on the internet via encrypted private messages.

A European Arrest Warrant has been issued for one of the gang members who has fled Spain.